by veeshaal pokharkar
in Web
1 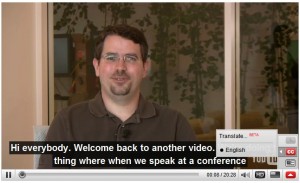 People who have difficulty in hearing unknown languages, can not only watch, but also to understand what the participants say. First automatic placing subtitles appeared in 2009 and was only available in English. Gradually expanded the range of supported languages, and has now been available for a total of 10 languages. This innovation means that the platform wants to make your video content more accessible to the audience of various countries around the World, thus increasing its quantity. Moreover YouTube launched a special tools that allow you to create your own subtitles and translate them into different languages. Not long ago, the service has integrated Google translation tools in YouTube Video Manager with support for over 300 languages .

YouTube audience is not limited to U.S. Citizens. The vast majority of users of video sharing platform – the inhabitants of the various countries of the world. The increase in the number of supported languages to play YouTube subtitles only benefit by increasing its popularity among Internet users.

According to the statistics service, it has more than 200 million videos from various automatic and manually created subtitles.

How to send attachments up to 10 GB with Gmail