At NYFW 2014, Ken Downing made a crucial observation about the growing wearable tech trend. The Fashion Director and Senior Vice President at Neiman Marcus succinctly stated: ‘Technology is what’s moving fashion forward.’ And as more designers become involved in the wearable industry, we can safely say that his statement was spot on. 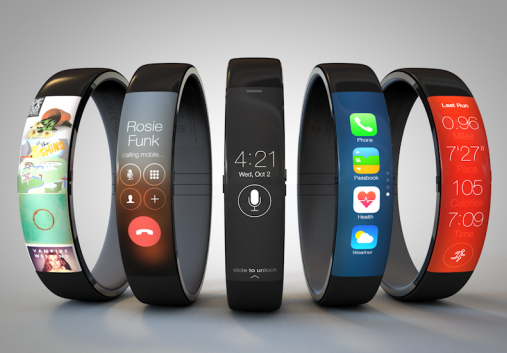 Wearable technology used to be predominately fitness trackers – either bracelet-like devices or tiny clip-on sensors to collect data throughout the day. But this involved a conscious effort to remember to wear it and a certain acceptance of a particular aesthetic; the term ‘geek chic’ comes to mind. In other words, wearables weren’t fully integrated into the average wardrobe, and certainly not into a fashion-focused one. But as designers like Rebecca Minkoff, Swarovski and Tory Burch team up with wearable manufacturers, fashion and technology are headed towards a symbiotic future.

With companies like FlexEnable paving the way for flexible displays and sensors, technology is being woven into the fibres of our clothing in new and exciting ways. The next generation of wearables features sensors embedded in the clothing itself and tracking your data begins with you getting dressed in the morning. “Using conductive yarn you can control the structure and the conductivity in that area and make it more or less conductive, measure compressive force, tensile force, temperature,” says Simon McMaster of Footfalls and Heartbeats. We’re already seeing this design in Ralph Lauren’s biometric shirt, which will feature in the US Open this year.

With a sleek look and classic fit, the fact that it can track distance, calories burned, movement intensity, heart rate and stress rates is subtly hidden beneath beautiful lines.

Another example of intuitive clothing is Dutch designer Pauline Van Dongen’s line of solar clothing. She says in an article for TechCrunch: ‘We’re all addicted to our smartphones and we want them constantly powered, and the better our batteries get, the more we’ll use them. And at the same time, working as a wearable tech designer, I know the difficulties when integrating these kind of bulky batteries that don’t allow for any comfort or wearability. So that’s why I thought, why not power your phone through your clothes? And eventually power other interactive qualities that our garments are becoming a platform for.’

Although these garments aren’t available for purchase yet, it’s certainly a start in a positive direction.

In addition to developments of wearable sensors, the latest trend shows that we will soon be able to power our smart garments without batteries. German researchers from HSG-IMIT have built shoe-sized devices that harvest energy from the simple act of walking: a “shock harvester” that creates power when the heel hits the ground and a “swing harvester” that produces power when the foot is mid-stride.

With technology researchers Gartner forecasting smart garments growing from 0.1 million units in 2014 to 26 million units in 2016, it’s these kind of renewable, compact sources of energy that will pave the way for future advancements in wearable devices.

How to Tell If Mortgage Points Are Worth the Cost