Toshiba released a printer that erase the printed text

Japanese company Toshiba Tec released a printer based on FriXion Ball pen technology, allows you to erase the printed text. On the development of the device was reported in the spring of 2012. It uses technology similar to that which applies in a special gel-filled ball point pens, but in this case it is a toner. 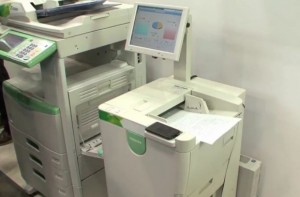 Have you heard of FriXion Ball pen that erase what it writes? Well, the Toshiba’s newly developed printer almost utilizes the same technology to erase the printed text on paper.The printer automatically carries out selection spoiled paper that cannot be reused, and clears a whole sheet. Then, the printed text is scanned for storage on the server, after which the text is dissolved. According to the words of developers of this printer, the same clean paper can be used up to five times.

Toshiba will start selling its printer in February, will be able to print only the text in blue ink but Toshiba may release the color printer of this type.

This is a special kind of toner that loses its color when heated, so this technology makes it look as if the printing has disappeared. With this system, one sheet of photocopy paper can be used at least five times, so this product combines economy with ecology. With FriXion Ball, the writing disappears through the heat of friction. With this toner, the printing disappears through heating to a high temperature. When we first release this product, the toner will be blue, but we plan to develop other colors as well. There’s no need to sort the paper between usable and unusable, which is something you’d have to do if you were just printing on the reverse sides of paper. So this system minimizes the workload on customers. We haven’t yet decided how to price this system. But we’d like to make sure it doesn’t increase customers’ printing costs much compared with the systems they currently use. Reusing paper makes the cost per sheet substantially lower, so we’d like to make this system as inexpensive as possible.