by Satyakam
in Games, Softwares / Games
0

Taking the gaming industry for a spin, NVIDIA has finally released the much awaited handheld gaming device, the SHIELD. After some initial delay, NVIDIA officially announced the launch of Shield, with a declined price tag of $300 from the earlier announced $350. 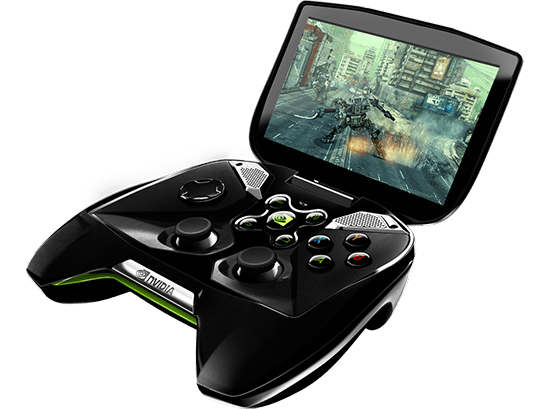 The SHIELD is the first of its kind with Android based gaming device which uses the powerful Tegra 4 SoC, can be handheld and has the unique capability to stream high performance computer games from your PC or laptop. Pumped up with a 5 inch touchscreen and a controller with an XBox-Design, the NVIDIA Shield is all in one device being a streamer, android console, display and controller all together. Even though the variety of computer games is little limited, NVIDIA assures about more options in the future.

NVIDIA has introduced the Tegra 4 SoC, which has four times better performance than the older Tegra 3.

Hardware design: The physical outlook of the Shield is superbly designed to fit your hands well. The bottom has a rubber finish and is more grippy. This enables easy holding and placing the Shield on any solid surface. The back portion of the Shield is curvier to support better positioning of the middle finger on it.

The hardware of the device sports various buttons like the D-Pad, A/B/X/Y buttons, Home, Start, Back, Volume, Left/right analog trigger and bumpers, NVIDIA Multifunction/Power button and Dual Analog Joysticks. The rear of the device is provided with a green coloured input frames. The frame allows for active cooling of the device.

Processor and Dimensions: The NVIDIA Shield uses a 1.9 GHz 4 ARM Cortex A15 processor integrated with NVIDIA Tegra 4 System-on-Chip (SoC). The Soc is provided with 72 GPU cores. It has a dimension of 158 x 135 x 57 mm and weighs around 579 grams. It sports a 5 inch retinal display with resolution of 1280 x 720 pixels. Under the display, stereo speakers are present. The speakers are loud and terrific. The microphone is present in the middle.

Memory and Storage: It is loaded with 2 GB LPDDR3 of Ram with 16 GB of internal memory. It also has microSD card slots for extension of the storage space. It uses an Android 4.2.1 Operating System, which is updated by NVIDIA.

Connectivity: For input options, the device is provided with mini-HDMI, microUSB and a 3.5 mm headphone. For wireless connectivity, the device supports two streams of 2:2 802.11 a/b/g/n Wi-Fi and GPS. The NVIDIA Shield also supports Bluetooth 3.0.

Battery: For better performance, the device is loaded with 28.8 Whr battery.

The concept of Android gaming is still new and range of PC games that can be streamed is less. The display is a little bit small, the design is slight bulky and the device lacks both rear and front camera. Except for certain limitations, the NVIDIA Shield is stuffed with irresistible features and action packed gaming experience.