One of the first decisions someone has to make when using Usenet is what type of connection they want.  While there are a number of services still offering unencrypted connections, SSL is included with quality Usenet services.  The big question new users should use an SSL connection or VPN for Usenet browsing?  To answer this question, it is important to understand the similarities and differences between both options. 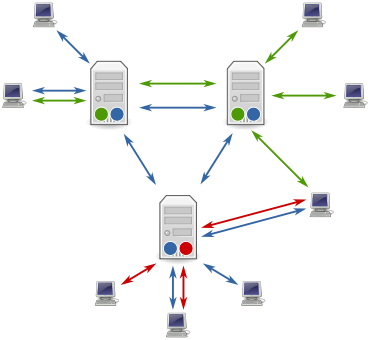 Similarities Between Using SSL and VPN for Usenet Browsing:

There are several key similarities between SSL and VPN connections.  For someone browsing Usenet, the most important similarity is both options provide an encrypted data stream.  The biggest benefit is that SSL connections are rarely throttled by ISPs.  Since this is the same type of connection used for online banking and shopping ISPs don’t tend to limit its bandwidth.  This is particularly important for users who are consistently running multiple applications (including their Usenet newsgroup reader) which are all accessing the internet simultaneously.  The other benefit is the ISP or any other third party will not be able to discern what the user is reading or discussing.

An Important Difference Between SSL and VPN Connections:

While both options are beneficial for the same reason, there is a fundamental difference which sets them apart.  When using an SSL connection, third parties can still see everything aside from what the user is reading or discussing.  This includes the source IP, target IP, and connection protocol.  Many ISPs are beginning to throttle connection speeds when users are connected to certain IP ranges.  An SSL connection does not protect users from this.

On the other hand, a VPN hides this extra information.  A VPN connection creates a virtual tunnel between the user and VPN server.  The ISP will then only see the IP address of the VPN server instead of the website or online service that the user is accessing.  This will prevent any destination-IP targeted bandwidth throttling.

Added Benefits of Using a VPN for Usenet Browsing:

Utilizing a VPN provides a variety of additional benefits as well.  This is especially true if the user tends to browse Usenet at Wi-Fi hotspots.  Wi-Fi hotspots are notoriously dangerous because they are not secured connections.  Using a VPN will protect users from the host of dangers which could be present.  A VPN will also provide Usenet users access to newsgroups which may be blocked or censored in their home country.

One thing to keep in mind is that a VPN connection will sometimes lead to slower connection speeds because of the added layer of encryption.  Fortunately, the best Usenet service providers have developed VPN technologies which offers comparable connection speeds to an SSL connection.

The final decision is based on two primary factors.  The first is whether the user cares if their ISP knows what websites they are visiting.  The second is whether the VPN connection can provide similar connection speeds as the SSL connection.  While there is no doubt one of these two options should always be used, choosing the best option is primarily based on the user’s needs.  If you are dealing with highly sensitive data, or are concerned about your data being stolen or misused you can consult a data safety company, such as SafeNet data protection company to see what steps you need to take to ensure your particular data.