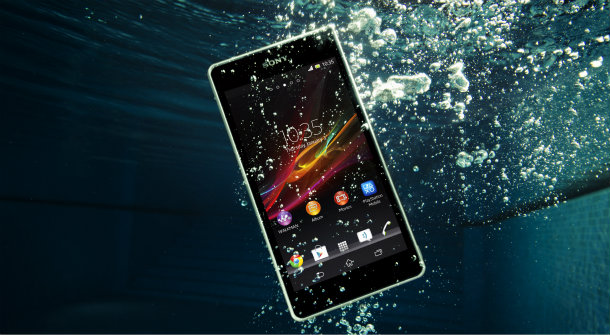 The most amazing feature of the Sony Xperia ZR is its waterproof and dust-resistant ability, Sony has used all the technologies that they used in the Xperia Z. The Xperia ZR has a little advance technology than its predecessor.
Do you want take underwater pictures? Then the Xperia ZR is the perfect device for you. This Smartphone is not only just waterproof, it can also take pictures under the water. You can record underwater videos as well. The most important fact is that you can record HD videos and take 13 megapixel pictures with this device, even under the water.
Sony has packed this device with Bravia Engine 2, there is also an Opti-contrast Panel, it improves the touchscreen sensor. They have used a 1.5 GHz quad-core Qualcomm Snapdragon Processor for this Smartphone. The specs of this device are given here.
• Display: 4.5 inch HD display with touch screen
• Resolution: 1280 x 720 pixels
• Camera: 13 megapixel rear camera with 16x zoom
• Engine: Mobile Bravia Engine 2
• Processor: Quad-core Snapdragon S4 processor at 1.5 GHz speed
• RAM: 2GB
• Internal Storage: 8GB
• Operating System: Google Android 4.1 Jelly Bean for mobile
• Resistance: Complete waterproof and dust resistant.

Though the internal storage is only 8Gb, you can extend it up to 32 GB via MicroSD card. Sony has also claimed that it’s a 4G LTE phone. You will also get a big number of apps installed in it. The price of this device hasn’t been announced yet, but it is expected to available in the global market from the second quarter of 2013.

Micromax A111 Canvas Doodle with Stylus: Now available Online for Rs. 12,999 Only

Micromax A111 Canvas Doodle with Stylus: Now available Online for Rs. 12,999 Only