Samsung is recalling the good old days of flip phones. If you have been missing your old flip phone then here is some good news for you. The widely rumored Android flip phone by Samsung was officially launched in China on Wednesday, 14th August, 2013. Samsung has dropped the special name of ‘Hennessy’, leaked previously in the internet circle. It has simply introduced the phone with its model number as Samsung W789. The new Samsung phone runs on Android operating system and features flipping dual screens with touch screen capability and supports dual SIM with active standby features.

Initially the Samsung phone will only be available for telecom users in China with a price tag of 4999 yuan (around $800). Its availability and price in the rest of places are yet to be announced. 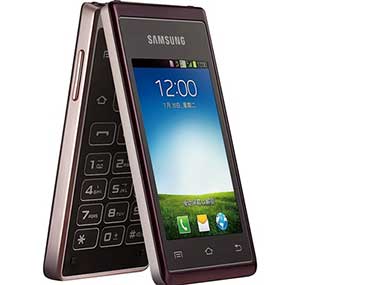 Mentioned below are the specifications and the features of the new Samsung W789 Android Flip phone with dual screen display:

The Samsung W789 has features a stylish combination of cute flip design and new age touch screen technology. The phone has dual display with dimension of 110.85 x 59.3 x 18.62mm. The phone has a weight of 208 grams. It has a flip flop build with fully functional physical numerical keypad closed inside the cabinet. It also has a 3.5mm audio jack.

The Samsung W789 phone sports a dual display touch screen with both internal and external display of 3.3 inch. The display has a screen resolution of 320 x 480 pixels (HVGA).  The external display is fully functional with touchscreen feature and 3 capacitive buttons. This includes the Menu, Home page and the Control Button.

The new Samsung W789 phone is pumped up with a 1.2 GHz Qualcomm Quad Core Processor.

The phone has 1 GB of RAM. The exact internal memory of Samsung W789 phone is still not confirmed, but the phone has microSD card slot for expanding the memory capacity of the phone up to 32 GB.

The phone is pumped up with a rear camera of 5 megapixel. It also has led Flash. The Samsung phone is devoid of any front facing camera.

The new phone supports the use of dual SIM i.e. both CDMA and GSM SIMs. It also sports the dual standby feature. For connectivity issues, the phone includes features like Bluetooth, GPS, Micro USB and Wi-Fi.

To support its features and maintain usage time, Samsung W789 is provided with a 1500 mAh battery capacity.

As per now, the phone is only available in the Chinese telecom market. It is priced at 4999 Chinese Yuan, approximately $800. The availability of the phone and the price tag for rest of the world are still to be disclosed by the Samsung Company.

The new Samsung W789 Android Flip phone is launched with preloaded Samsung Apps like the ChatON, its unique messaging service.

The Samsung phone is still not available in the market. To experience the fun of flip phone with touch features, we have to wait a little bit.