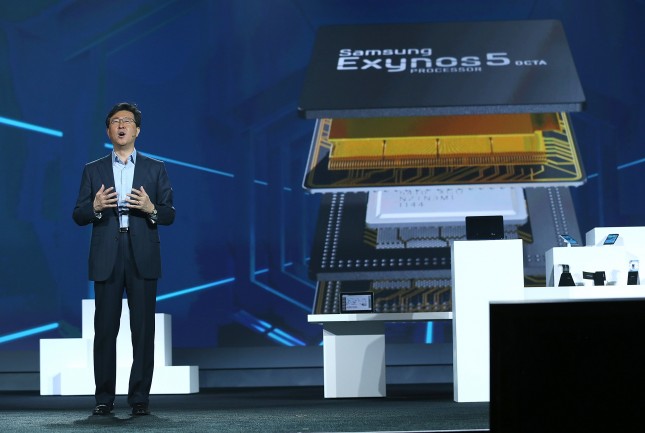 Thus the newer version of Exynos processor will bring much improvement into the performance of the next upcoming smartphones of Samsung to create history. Exynos chipsets will get upgrades as well.

The Tweet has some amazing offers as well. Office Samsung has announced an Exynos powered device to a person who will be participating tweeting with #ExynosEvolved. This is just a giveaway from Samsung as a teaser post.

People can call it consequence. But, we believe that the teaser tweet of Exynos 5 Octa is somehow related to the latest release of the Note series, Galaxy Note III to which every one of us is eyeing for.

A few days earlier, we came to notice a report that stated Galaxy Note III will contain 5.7-inch display. Some of its specifications are told to be rumored by the media. Like, it will sport Exynos 5 Octa Chipset with 8 cores and Mali 450 GPU for better and improved graphics. It also said that the newest flagship from Note series will sport 3GB RAM to empower the device with more possibilities. It will feature 13-MP rear camera as well. The date is also confirmed by the source that it will be released within September like the Note II was released in the same month last year.

We’re totally blind about the real news since Samsung has said to reveal the mysteries on the next week.