One of the biggest phone manufacturing companies, Nokia had an event in London in the first week of May, 2013 and it was expected that the company would introduce its next Smartphone on the event. But there was no such declaration from the tech giant company. Everyone was thinking that a new Smartphone with Windows 8 operating system would be the next flagship of Nokia, but a rumour has spread that the company is going to introduce an EOS handset. 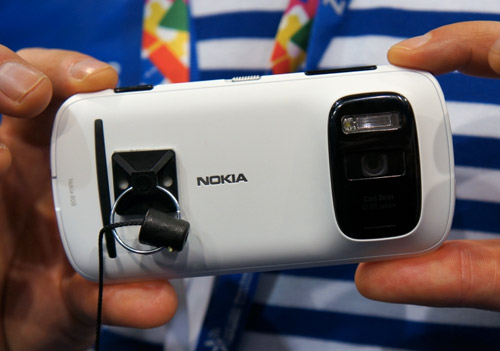 The news was spread by an eager fan of Nokia Smartphones. That lucky individual has claimed as he has allegedly viewed the next Smartphone of Nokia, it will be a Windows 8 phone with 41 megapixel camera. It is predicted that this device may have some similarities with Nokia Lumia 920, Lumia 925 and Lumia 928. It may also have equivalence with the PureView 808.

According to the source, Nokia’s upcoming phone will have some qualities of both Lumia 920 and the PureView technology. The rumour says that the EOS will have a metallic body with fine finishes like the Lumia 920. It will also have a quad core processor, waterproof ability and Windows 8 OS. These are the common features of both of these devices.
The phone will be packed with an AMOLED screen, the resolution of it will 768 x 1280 megapixels, the same resolution as the Lumia 920. The Lumia 920 was packed with an LCD + HD display. You may find the speaker of the phone at the bottom of the frontal part.
The source also said that the phone will come with a Xenon flash, it was previously used in the PureView 808.. The lens of the device will be the same lenses used in the PureView 808 as well. You may find a red LED on the right side of the flash to make the focusing easy.
The report adds, Nokia will introduce a new app, “Nokia Pro Camera” with this device. Well, there will also be an automatic cover, it will open when the camera app starts.
There is no sure news about when this phone will be introduced. It I expected that Nokia will launch it on the last of week July or later in August.