Micromax, one of the leading mobile companies of India, is thinking about bring their latest model of smartphone in the market which is named Micromax A115 Canvas 3D. The Canvas series of Micromax have already gained a good reputation in the market. So it is expected that the new model will be a huge success. Though Micromax hasn’t released the pictures of this new smartphone yet, the pictures have been leaked in twitter. From the twitter account @MMXNewscaster, quite a few pictures were posted. The features of Micromax A115 Canvas 3D were also came to light with the pictures. The Micromax authority is enquiring about it as this can hamper their marketing process of this phone.

This Micromax A115 Canvas 3D contains a wonderful and latest feature in it which is quite unique. Its 3D user interface and back picture will expectedly help Micromax to catch the market quite well. Like the earlier Smartphones of Micromax, it runs on an android. Android Jelly Bean 4.1.2 is the advanced version of android and the phone runs on it. A WVGA screen of 5-inch having 480×800 pixels is used in it. The camera features are quite appetizing as well. Its rear camera is an 8-MP containing LED Flash. The 2-MP front camera is quite a handy one as well. 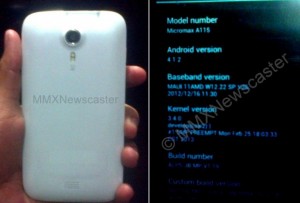 There is another rumor and confusion about the operating system. Recently, that twitter user said that dual-core MedaTek MT6577 will be the processor. But a few days earlier he said that MediaTek MT6589 QuadCore should be the processor of Micromax A115 Canvas 3D. After the success of the earlier versions of Micromax Canvas series (Micromax Canvas 2, Micromax Canvas HD), it is expected that this will be the new craze in present generation. However, there is no leaked information about the price of this Micromax Smartphone.

We believe this leaked news. But still we have to realize that this news is not from any authorized source. So, for getting aware of the true fact, we have to wait and see. If Micromax is really thinking to bring Micromax A115 Canvas 3D to market, we do not have to wait for too long.