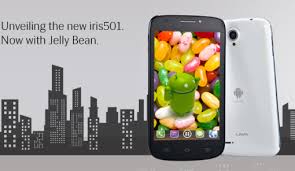 This great news was leaked in the of official fan page of the company, in Facebook. They uploaded a picture of Lava Iris 501 and gave a heading about the newly released Jelly Bean Firmware. They have announced another good news too. The persons, who are already the owners of Lava Iris 501, can upgrade the Android version of their Lava Iris 501 Smartphone. When it was first release, it operating system was Android ICS 4.0.4. Jelly Bean is way better than ICS. That means there is no need to feel unlucky because you have a Lava Iris 501 with Android ICS operating system. You should take your phone to the nearest service center of Lava mobile. They will upgrade the Android version of your mobile from ICS to Jelly Bean at free of cost!

It is hoped that Lava Mobile will be introducing many more upgraded Smartphones in the near future. Already they have come out with another one, which is Lava Iris 502.  This is expected to draw the attention of people as well.