by veeshaal pokharkar
in Interesting
0

Two stars orbiting each other at very high speed, gives scientists the opportunity to practice to look at what Albert Einstein said – curvature of space time. That is, of course, the curvature cannot be seen, but you can watch the gravity hopper, which accompanies this curvature. 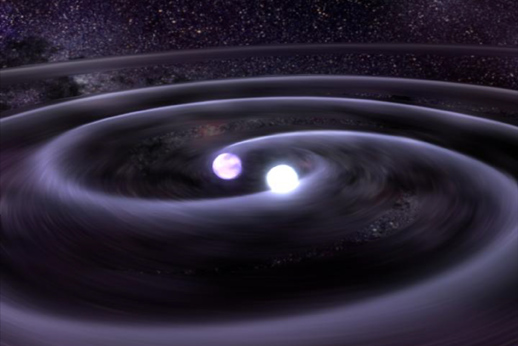 Scientists observed Gravitational waves from two white dwarfs, white dwarf (White dwarfs are the remnant cores of stars like our Sun.) – a very dense, hot and bright star types. Two white dwarf in a binary system makes a complete revolution around each other in just 13 minutes of Earth time. The two white dwarfs – is, formally speaking, the stellar core, which tightened under the influence of its own gravity. In the new system, two stars orbiting each other three times closer than the space between Earth and the Sun.

Researchers say in this system the first time they have recorded the optical distortion of light caused by the gravitational funnels. The crater itself – it is a product of the giant gravitational field produced by each of the stars.

“This observation is perhaps the most clear and precise evidence of the effect of gravitational waves,” – says astronomer Warren Brown of the Smithsonian Center for Astrophysics in the U.S. Gravitational waves and gravitational funnel described in the general theory of relativity.

According to this concept, they bend the plane of space time and cause the effect when the shortest point between two objects is not a straight line and a curve. Such exotic effect generates very high gravity of the two stars, to draw together. Also gravity hopper (and much deeper) should be observed for black holes, but because a more powerful gravitational black hole suck completely visible light and lock the funnel from the external system. In the case of new star’s gravity was large enough to create funnel, but not large enough to “swallow” all the light that falls on the boundary.

Warren Brown said that just over a year ago, another team of astronomers has found too extreme binary system, but it did star full rotation around each other for 19 minutes, but now the process in the new system takes up less than 6 minutes, which means a smaller distance between stars. In the next few years, science to have a laser interferometer LIGO (Laser Interferometer Gravitational Wave Observatory), which will clearly examine the gravitational funnel. Time to do it from the experts will be enough, as the astronomers estimated that the stars in the system will face each other only after 2 million years.

Further observation of J0651 system will allow scientists to better understand how Gravitational waves from two white dwarfs works, and what we expect from it.