A rumor was spread that Apple is going to introduce a new model of iPhone 5S at a cheaper price than its predecessors. But it wasn’t the right rumor as Apple has introduced an iPod Touch instead of the iPhone 5S. Apple, the tech giant of the US has announced their next device, it is an iPod touch with 16 GB storage and it is priced at $229 only. Well, it is much cheaper than other similar devices in the market. 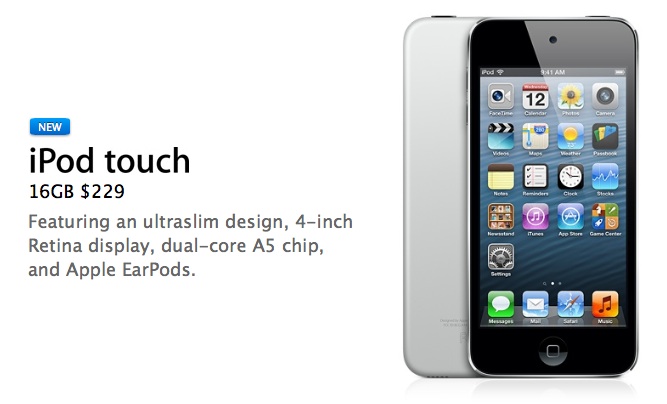 This new device is regarded as the cheapest device in the portfolio of Apple. As it is very much affordable, it’s surely going to make a good impression in the market. But there are some deficiency in this device as there is no rear camera lanyard eyelet in this device.

Apple has introduced it as the fifth generation iPod touch music player. It has added some new functions in this device. But some of the features are similar to its previous models.

The new music player has a 4 inch large display with touchscreen facilities, it is commonly known as the retina display. The display has some similarities with the display of Apple”s iPhone 5. Apple has packed this device with a dual core A5 processor. It has also the Apple EarPods and the Lightning Adapter which are the unique features of Apple.

Though there is no rear camera in this music player, it has a very good front facing camera. It is an HD camera with 720 pixels resolution and it can be used for video calling. Well, this camera can be used to take selfless.

This new device will run on iOS 6, it has the capability to run A5 processor. The back-up time is very good in this device, it can play videos up to 8 hours and audios up to 40 hours.

This is a portable device as it weighs only 86 grams. It has a large storage of 16 GB, so you can store a huge number of musics in this music player. It has been listed in the official website of Apple and it will be available very soon.